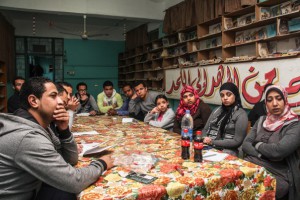 Geziret El-Dahab has a total population of 117000 and is located in the South of Giza Governorate. The target area Masaken Geziret al-Dahab, a part of Geziret al-Dahab, covers an area of 0.666 square kilometres and is today home to about 36000 inhabitants. Geziret al-Dahab began to be settled in the early 19th century by three big families from Upper Egypt and most of the areas’ residents are hence originally from Upper Egypt or different places in the Nile Delta. Masaken Geziret El Dahab is characterised by its proximity to various means of transportation, such as several bus stations and a metro line. All of these connections make the area a crucial connecting point from and to the centre of Giza Governorate. 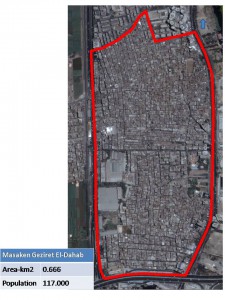 Most residents of the area work in construction, mechanics, plumbing, repairing home appliances, as barbers or in aluminium workshops. The majority of Geziret al-Dahab’s population work as unskilled or semi-skilled labour and are dependent on volatile wages which are often paid on a day-to-day basis. Unemployment is high in the area, especially amongst youth and degree holders, and even those working are often unable to pay for all household expenses due to very low incomes.

There are two markets for fish, fruits and vegetables located just outside the area and there are a variety of shops from bakeries, groceries, cafes, pharmacies and small diners inside the area.

In the Participatory Needs Assessment, the residents of Geziret al-Dahab identified unemployment as the single most important problem in their area. They also decided that the poor quality of health services was the second most problematic issue in the neighbourhood that needs to be tackled. Finally, the improvement of living standards in the area constituted the third identified priority of local residents.