In response to the Egyptian government’s request to the German government to contribute to finding a sustainable solution for the informal areas in Egypt, the PDP was launched. This was in collaboration with the Egyptian Ministry of Housing, Utilities & Urban Communities, the German Technical Cooperation (GIZ) and the German Financial Cooperation developing bank (KFW), in addition to the Egyptian Ministry of Local Development, NGOs, and the three governorates of Cairo, Giza, and Alexandria. It is being implemented over different phases from 2004 to 2014.

The programme was first launched in two pilot areas: the districts of Boulaq El Dakrour in the Giza governorate and of Manshiet Nasser in the Cairo governorate. Thereon, after the programme expanded to cover the district of Helwan in Cairo and then three areas from the Alexandria governorate in 2006. Overall, it aims at promoting cooperation between public administration and civil society in order to meet the urban poor’s needs. This involves supporting the Egyptian counterparts, including the involved ministers and the targeted governorates, to find and implement sustainable solutions for informal areas.

The PDP team believes that development of informal urban areas requires policy changes and a good level of decentralization that would allow for the employment of participatory approaches to be carried out. Therefore, the PDP concept is to come up with a holistic methodology that promotes the implementation of participatory methods during the upgrading of informal areas. These methods are carried out at three levels: a local level, such as municipalities and NGOs; a regional level, such as governorates; and a national level, such as ministers. On the national level, PDP offers advice to ministers on how to integrate participatory development into policies; on the regional level, a number of participatory methods are presented to the municipalities and implemented in the four pilot areas; while, the problems at the local level are addressed through supporting local initiatives and building trust between local people and local administration. The below diagram shows the three levels of intervention and each one’s mode of action: 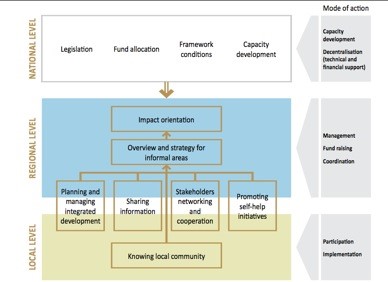 The overall goals of the programme are to achieve sustainable urban development, to alleviate poverty in urban areas, and to attain social inclusion, good governance and democracy. There is a set of ‘programme fields’ that are necessary to the achievement of the overall goals of the programme: upgrade of informal areas, participation, capacity development, decentralisation and institutionalisation, in addition to a set of principles adopted in the programme fields phase, such as local ownership, partnership, empowerment, gender equality and building trust.