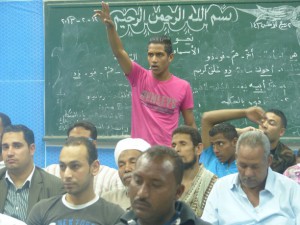 Ezbet El-Nasr is an informal settlement on desert and state-owned land, covering an area of 0.42 square kilometres with 72190 inhabitants. It is formally attributed to the southern districts of Cairo and the Al-Basateen district. It is bound by the Ring Road to the South, the highway called “Autostrad” to the East and the slaughterhouse to the North. A historic Jewish cemetery is embedded into its western parts. The two highways in the South and the East form both extension barriers and main access ways. The history of the area’s construction goes back more than 40 years and is strongly linked with an influx of rural migrants from Fayoum, Bani Sweif, Menia, Asyout, Sohag and Qena.

The outskirts of Ezbet El-Nasr are home to more developed-housing stock and business hubs. Most internal streets are unpaved. Ezbet Al-Nasr is in many ways physically and socially segregated from the rest of the city. Although many basic urban services are actually present on site, quality and maintenance of these are often unsatisfactory 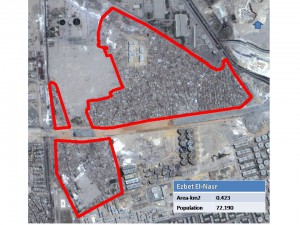 Ezbet El Nasr area is characterised by great vocational diversity. The majority of its residents work in construction, marble and stone crafting, as well as in mechanic and tannery workshops, while others work as employees in both public and private sectors. The average income of a family in Ezbet El Nasr ranges between EGP 600 to EGP 1,000 per month. Families spend most of their income on food, education, health services, and house rent. Food is bought from markets in El Basateen area as there is no permanent market in Ezbet El Nasr and if available, fruits and vegetables are overpriced in the area. The Ministry of Environmental Affairs built a market compound in the area, but due to the high prices local residents did not buy from the market stalls and most of them had to close down.

The majority of Ezbet El Nasr’s youth work in the craft workshops and since there is no available vocational training they gain experience through on-the-job training. Youth in the area would be eager to establish small enterprises in order to overcome high rates of unemployment, but they lack financial support.

In the Participatory Needs Assessment, the inhabitants of Ezbet El Nasr identified the lack of good health services as their utmost priority. Secondly, the lack of access to natural gas is perceived as a big problem by the local residents, as they either need to buy Butane canisters in remote areas or will be charged exaggerated prices locally. Finally, security issues seem to become more of a concern to the inhabitants of Ezbet El Nasr and especially the youth considers it the number one problem in the area. Increasing crime rates are directly linked to more and more widespread drug abuse.