The International Symposium on “Exchanging Global and Egyptian Experiences in Dealing with Informal Areas within the Wider Urban Management Context” was held by the Participatory Development Programme (PDP) of the GIZ and several Egyptian partners in Cairo from 14th to 15th October 2008.

The main focus of the symposium was to exchange international and Egyptian experiences of scaling up best practices in dealing with informal areas to a city-wide management approach. More than 230 interested guests from a broad scope including the public and private sector, international organisations and NGOs attended the opening words of the Governor of Cairo Dr. Abdel Azeem Wazir and Hazem El-Kuweidy, Governor of Helwan, Bernd Erbel, Ambassador of Germany in Cairo, Dr. Roland Steurer, Country Director of GIZ in Egypt, Mr. Jörg-Werner Haas, Division Head “State and Democracy” in GIZ headquarters and Marion Fischer, Programme Manager of PDP. 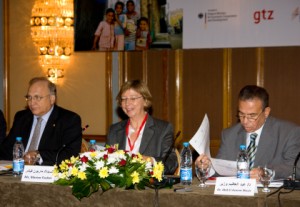 On the eve of the symposium a field visit to Boulak El-Dakrour, an informal area in Giza, was offered for international guests to get an idea of the peculiarities of informal settlements in the Greater Cairo Region. 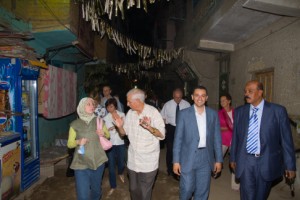 Dr. Mostafa Madbouly, Chairman of the General Organisation for Physical Planning (GOPP) (Ministry of Housing), started the presentations’ sessions the next morning with an overview of the Egyptian Government strategy for dealing with the informal areas, followed by an impressive speech by Mr. William Cobbett, Manager of Cities Alliance, concerning strategies of dealing with potentials of urban informality, which are in most countries largely unrecognised by the local municipalities. Concluding the first day, Dr. Khaled Mahmoud Abdelhalim, (Advisor on Informal Areas to the Governorate of Giza and Team Leader of the Urban Planning Unit of PDP/GIZ), presented GIZ experiences in dealing with the informal areas in Greater Cairo, and introduced approved tools and methods in slum upgrading to the audience. Lively discussions followed each session, underlining the strong need for ongoing dialogue of all stakeholders involved in the field of informal areas as well as combined / participatory actions to tackle the issues / upgrading process. In the evening a reception took place in the Azhar Park, to provide an opportunity for all interested participants to exchange global and local expertise. 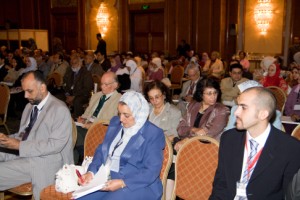 On the second day of the symposium, Dr. Patrick Wakely, Urban Planning Associate of the University of London, focused on the Institutional Setting and Organisational Arrangements for Participatory Development and Planning of Informal Areas. Dr. Dina Shehayeb, UN-Habitat Advisory Board Member, highlighted the advantages and the potentials of Informal Areas in terms of offering affordable housing, job opportunities and public safety not only for the urban poor but also for Cairo’s middle class. Prof. Dr. Peter Herrle, Head of the “Habitat Unit” at the Berlin University of Technology, presented his research results concerning the often unrealised potential for economic growth of the informal sector. This is an assumption strongly supported by his colleague, Prof. Günther Meyer, Director of the Centre for Research on the Arab World” (CERAW), who presented the findings of a long-term study on Survival Strategies of Small-Scale Manufacturing in the Informal Settlements of Greater Cairo. Mr. Jörg-Werner Haas illustrated the decisive role the GIZ can play in developing unleashed potentials by capacity building (and management consultancy) of the local administration in informal areas. The participation of the audience in the discussions was lively and enhancing. The closing words centered on three major findings: (1) that the top-down management approach is out of date, (2) that creating an enabling environment for informal areas is crucial for activating the energy within them and (3) that we have to rethink the concept of informal areas, as they form an integral part of the city. 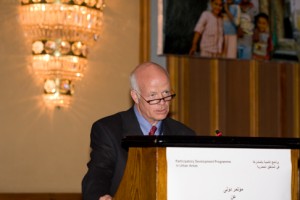