For the PDP the UUUs are an important part in its participatory approach of upgrading informal areas. Through the units, the development measure is able to further capacity development, institutionalisation as well as decentralisation of administrative bodies. “The general role of the UUUs is to provide strategies and implement mechanisms for the development of informal areas at the Governorate level,” said Dr. Guenther Wehenpohl, Programme Coordinator PDP. “Furthermore, they facilitate technical interventions and approaches as well as support different management styles in urban upgrading.” As each District has its special areas where the PDP implements several projects, the respective UUU has its own tasks to fulfil apart from the general role it plays. In the case of Ain Shams, the unit will be preparing infrastructure projects for the development of informal areas, coordinating with NGOs and youth alliances of the District to prioritize projects, carrying out required and administrative works and attend trainings and meetings. While the UUU in South Giza will be responsible for tasks such as coordinating development mechanisms for informal and unplanned areas using participatory methods to engage the residents and relevant stakeholders, identifying development needs and coordinating the resources required for that and following up with the implementation of all projects. Both events were followed by a lively press conference. 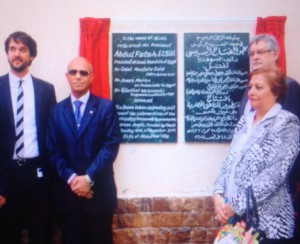 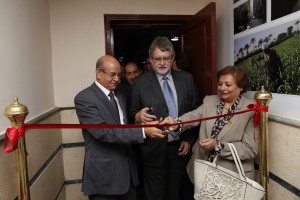 On Saturday, 1st of November His Excellency Fritz Kuhn, Lord Mayor of Stuttgart, together with his six-member delegation visited two of the PDP’s grants projects in Ezbet el Nasr, one of the informal areas in Cairo Governorate, as part of his three-days trip to Cairo. Since Stuttgart is the twin city of Cairo the delegation aimed at getting insights of Cairo’s current situation as well as revitalising the existing partnership. The PDP was honoured to be on the agenda of the delegation and to get the opportunity to present itself and its partners to Stuttgarts’ high-ranking delegation. Together with representatives from the German Embassy, members the Cairo Governorate as well as its partners from the area the PDP showed the delegation two of its 17 projects which got awarded with a contract from the European Union as part of its Grant scheme in last July.

The day started to Misr El Qadima Voice Association, an Egyptian NGO, which is implementing environmental measures with its project “My right to live in a clean and secure environment” until the end of June 2015. In Ezbet el Nasr, the project is creating a green area of 1600m2, establishing street lightning, installing fixed garbage containers and bins and raising awareness of local residents on environmental issues. While the delegation was very impressed by the projects’ structure and content it also raised critical questions which were also discussed with the people in charge. To what extend the Cairo Governorate is welcoming and supporting projects like these and how sustainability would be guaranteed after the finalization of the project were the concerns of Lord Mayor Kuhn. Excited about the fact that the informal area will get its first park he appreciated the NGO’s efforts and further encouraged it for future activities.

Fayoum Agro Organic Development Association is the second project visited on the day. It is contributing to the improvement of the educational services in Ezbet El Nasr by establishing a model child club that offers kindergarten services and extra-curriculum activities for teenagers. The delegation and its accompanists were the first high-ranking visitors to the freshly renovated premises of the project. By elaborating on the purpose and structure of the project all attendees could draw a picture of how the kindergarten would look like for the estimated 40-50 children. Lord Mayor Kuhn was very interested in learning about the planned educational and cultural opportunities for both teachers of primary and secondary schools as well as for students from secondary schools.

On the way to the next stop of their programme Lord Mayor Kuhn and his six-member delegation reflected on the newly gained impressions and already thought about new fields of cooperation between the twin cities Stuttgart and Cairo.