The Participatory Development Programme in Urban Areas (PDP) successfully held a workshop on community mapping in Cairo’s Ain Shams area on 25th and 31st of March 2014. While the first day addressed mainly young people the second day was directed at local residents of all ages. A special focus was given to youth and women. 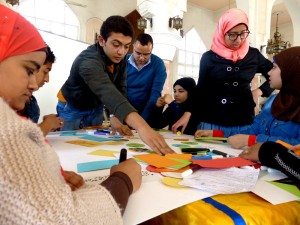 The workshops were divided in two parts. During the morning sessions, the almost 50 participants got a training on the issues of Climate Change where PDP employees illustrated causes, impacts and potential solutions in regards to rising temperatures. This was followed by a presentation of the NGO Ain Elbiaa on their current actions towards environmental interventions in various settlements in Cairo. The last presentation has trained the participants in how to read maps through digital images of their area.

In the afternoon session, the community members became active themselves. By deploying colors, clay, stickers and other tools, they pointed out environmental challenges, current actions and new ideas for future interventions on satellite images showing their neighborhood. “I really liked the usage of colours, clay, plastic trees and paper to express ideas for our neighbourhood,” said one participant. “I had lots of fun.” Different working groups developed creative and illustrative maps and introduced them together to the full plenum. As a result, several environmental issues were discovered upon which lively discussions started between the working groups.

Environmental issues, especially climate change and its impact, are considered one of the biggest challenges to development in the 21st century. The increased vulnerability of cities is mainly caused by environmental and climate change related implications which affect both inhabitants and infrastructure. In case of Cairo’s informal settlements in particular air pollution, solid waste, heat, density, lack of green space and sewage are among the most severe challenges. Since these areas lack financial support for mitigation and adaptation measures they are increasingly at risk.

With its various activities and different workshops, the Participatory Development Programme in Urban Areas (PDP) reaches out to its communities in order to spread awareness of these problems and encourage them for active participation. During the community mapping workshop, the participants learned about the challenges of the local environment. Together they analyzed and found innovative solutions such as roof top gardens, wind catchers in houses in densely populated areas, garbage collections or biogas production. “I have learned so much about ideas on how to solve environmental challenges in my area,” said another participant. “I will try by myself to realize some of these ideas and start doing development activities in my area.” 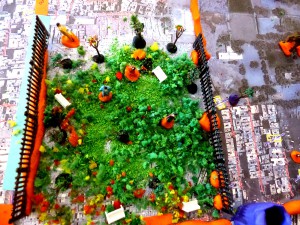 Adding some “Green” to the area 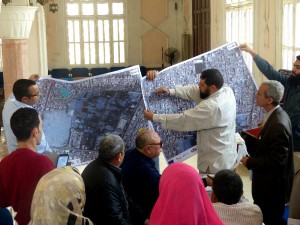 Participants introducing their result maps to the plenum

The workshop introduced the production of maps and the participatory mapping technique to community members and local stakeholders (Urban Upgrading Unit, NGOs, Local Area Dialogue Committee). Moreover, during these two days, a variety of stakeholders were brought together, relationships were built and fostered.

The maps, as one outcome of the workshop, contribute to the knowledge and information of PDP on environmental challenges and opportunities in the area. Furthermore, they point out where future interventions are possible.

Thanks to all participants who contributed to the success of the workshop!