Training on ‘Concept Note writing’: Due to the great interest in our two-day training session, PDP scheduled one additional training round to interested applicants for the 6 & 7 March. Please register for the training round no. 5 here: http://egypt-urban.net/training-on-concept-note-writing-23-02-07-03-2016/

The fifth meeting of the Advisory Board on Climate Change in Cities (AB-CCC) took place on Thursday, January 21, 2016 and held in Cairo House (cultural, educational center of the Egyptian Environmental Affairs Agency “EEAA”). The meeting was organized by EEAA in cooperation with PDP and was attended by representatives from EEAA, PDP and different government bodies, ministries and local authorities. The objective of the meeting was to discuss the outcomes of COP21 conference which took place in Paris in November 2015 and to draw out national adaptation strategies with a specific focus on urban area, particularly the Greater Cairo Region.

In the opening presentation Dr. Mohamed Ismail, on behalf of EEAA, presented the articles from the Paris agreement regarding adaptation and damage and loss and stressed the importance of developing adaptation strategies. Mr. Saber Osman drew the attention of the attendees to the role cities play in climate change adaptation efforts. During COP21 organisations such as C40 group (Cities Climate Leadership Group), Climate Summit for Local Leaders (ICLEI), Local Governments for Sustainability, 100 Resilient Cities initiative by the Rockefeller Foundation, Global Covenant of Mayors, Cities Alliance, the Compact of Mayors, in addition to other  initiatives and activists have been actively involved in developing cities plans and guidelines in order to support cities to build resilience, reduce GHG’s, spread low carbon technologies, improve citizens adaptive capacity, adapt to climate change impacts and manage expected disasters.  Their advocacy work  led to the recognition the role of the local governments and cities and their empowerment for the first time through Paris Agreement.

Mr. Philip Schuck, then, presented the different projects of PDP’s climate change component to assist in Greater Cairo Region’s adaptation efforts as an example of what cities can do. This was followed by presentations on the current adaptation efforts in strategic sectors such as agriculture, health and water and irrigation were held. The audience engaged in a fruitful discussion which stressed the importance of further studying the impacts of climate change on the different sectors in order to develop a national strategy to adapt to climate change, particularly in cities, in line with the Paris agreement. Also, new cooperation opportunities raised through the discussion such as the importance of proofing the governorates plans against climate change impacts, adaptation and opportunities, as well as, the importance of engaging in international local governments movements such as Local Governments for sustainability (ICLEI) to improve cities plans for better adaptation and resilience with climate change impacts. In addition, some ideas related to funding mechanisms proposed during the meeting such as proposing a special funding window for cities under the green climate fund (GCF). 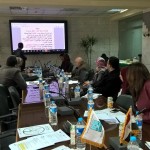 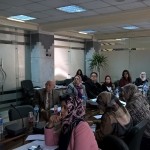 On Tuesday, November 24, the Egyptian Environmental Affairs Agency (EEAA) in cooperation with the Climate Change Component of the Participatory Development Programme in Urban Areas (PDP) organized the 4th Advisory Board for Climate Change in Cities (AB-CCC) in order to discuss the potentials and limitations of developing an Early Warning System for extreme weather events. The half-day event was held in Cairo House and brought together representatives of different institutions.

In the opening remarks, Ms. Amira Fahim, on behalf of the Informal Settlement Development Fund (ISDF), the political partner of PDP, and Mr. Mohamed Ismail, on behalf of the Egyptian Environmental Affairs Agency (EEAA), the technical partner of PDP, have stressed the importance of developing an Early Warning System. Such a system is necessary to adapt to climate change impacts and extreme weather events like heat waves which have resulted in loss of lives and assets during 2015 summer in the greater Cairo region (GCR). This is particularly important for informal settlements, as their higher population density, lack of adequate infrastructure and weak awareness increase their residents’ vulnerability to climate change impacts.

The event included presentations by Dr. Mohamed Ismail giving an overview on different, pressing climate change impacts and Saber Osman explaining PDP’s conceptual approach and current projects in climate change adaptation in urban informal areas in the GCR. It was followed by presentations by Dr. Samir El-Shura and Dr. Osman El Sheikh on the technical requirements for establishing an early warning system and on a project running in Southern Egypt which uses forecasting to develop agricultural resilience, respectively.

The attendees then engaged in a fruitful discussion moderated by Dr. Mohamed Ismail where ideas on the necessity of cooperation and the development of synergies between different actors were put forth.

The overall objective of the 3CfP is to enhance the living conditions of the poor urban population living in five deprived informal areas through improved socio-economic conditions increased service delivery and enhanced environmental protection.

The 3CfP has an overall funding of € 6.65 million. Interested Organisations can download the Guidelines for Grant Applicants as well as the Application Form (incl. Annexes) from our website under “Grant / Third Call for Proposal (launched)”: http://egypt-urban.net/grants/third-call-for-proposals/

Training on ‘Concept Note writing’: PDP is offering a two-day training session to interested applicants. Trainings will be given between the Feb. 23rd and March 03rd, 2016. Please register for one of the following training rounds here: http://egypt-urban.net/training-on-concept-note-writing-23-02-03-03-2016/