A third steering committee meeting was held on February 9th, 2014 at the Ministry Of Planning; around 20 different stakeholders participated in the meeting. Stakeholders included Ministry of Planning (MOP), Ministry of International Cooperation (MOIC) Informal Settlements Development Facility (ISDF), Ministry of Trade and Industry (MOTI), , Cairo and Giza Governorates, the EU Delegation and GIZ. The purpose of this meeting was to inform the Steering Committee members about the main activities of the PDP EU Components, most notably the progress of the First Call for Proposals, feasibility studies, the Local Area Dialogue Committees (LADCs), capacity building of civil society and Governorate Urban Upgrading Units(UUUs),the selection of new informal areas targeted in Cairo, Giza and Qalyubeya Governorates and climate change adaptation (in Cities) and urban resilience. The meeting also aimed to present the steps ahead, particularly with regard to the EU Grant Scheme. 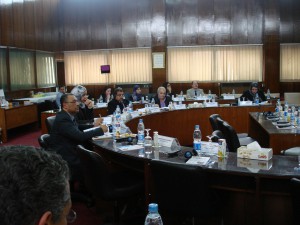 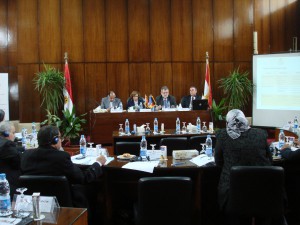 Cairo, 26th of August 2014, Today the Participatory Development Programme in Urban Areas (PDP) successfully launched together with the European Union (EU) Delegation to Egypt the Second Call for Proposals for projects to improve informal areas in Cairo (Ain Shams and Ezbet el Nasr) and Giza (El Warraq and Masaken Geziret al Dahab) Governorates in the Conrad Hotel in Cairo. The event which was attended by His Excellency Dr. Ashraf El Araby, Minister of Planning, attracted around 400 participants who were informed and taught about the application procedure. As part of the agreement between the EUD and the Deutsche Gesellschaft für Internationale Zusammenarbeit (GIZ) GmbH, who is the contracting authority, projects which will be contracted under the Second Call for Proposals are funded by the EU with almost EUR 10 million (EGP 95 million) and should focus on improving service delivery and environmental conditions in the respective areas.

“Supporting the development of the civil society and the fight against poverty is an essential part of the EU’s partnership with Egypt. We believe that the projects to be funded under the 2nd Call for Proposals will contribute significantly to those aims,” said Ambassador James Moran, Head of the European Union (EU) Delegation to Egypt. The selection process of applicants is based on EU specific rules and regulations and is managed by the PDP which will facilitate the implementation of the selected projects together with respective partners in the two Governorates by providing technical support. “The policy of the Egyptian Government for improving informal areas embraces such development measures as PDP,” said Dr. Ashraf El-Araby, Minister of Planning. “Since ten years it delivers benefits to the needy and proves to be successful with its participatory approach. “

Through cooperation with public administration and civil society organizations, the PDP is introducing and supporting theimplementation of participatory methodologies for urban upgrading in order to improve service provision and thus living conditions in an integrated manner. “We have carried out a research study in Ain Shams, Ezbet el Nasr, El Warraq and Masaken Geziret al Dahab in 2013 to find out about the needs of the population in these areas,” said Dr. Günther Wehenpohl, Programme Coordinator PDP. The scope of the Second Call for Proposals derives from the findings of the study which identified the priority needs of the residents such as health, education, solid waste management, youth and recreation, transportation and environment (incl. adaptation to climate change). “With today’s information session we started the application process. Potential Beneficiaries are invited to apply for a grant to meet these needs in a most effective and efficient possible way. We highly welcome innovative projects. Moreover, we even expect to have a replicability of some projects in other informal urban areas of Greater Cairo Region and other Egyptian cities,” Wehenpohl added. After the application period the selected Beneficiaries will be directly contracted by PDP which is actually one of the most relevant international development cooperation programmes working on improving and developing urban informal areas in Egypt. PDP is financed by the European Union (EU), the German Government, the Bill and Melinda Gates Foundation and the Egyptian Government. The current phase of the development measure (2010-2018), under which the Second Call for Proposals is launched, is funded primarily by the EU.