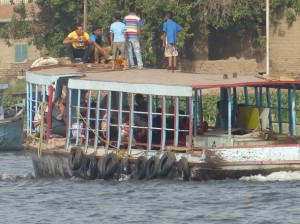 El-Warraq has a total population of approximately 1 million and is located in the North of Giza Governorate. The target area Markaz al-Abhath, a part of El-Warraq, has an area of 0.667 square kilometres and 132340 inhabitants.

Inhabitants of El-Warraq originally come from different governorates in Upper Egypt, such as Beni Suef or Assiut, or from other areas in Cairo such as Rod Al-Farag or Manshiet Nasser. Many residents state that they have lived in the area since the 1960s or 1970s, while others were born in the neighbourhood. 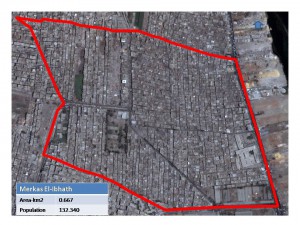 El Warraq District has many distinctive landmarks, the most evident of which are the Ministry of Irrigation buildings, Misr Gas Company, and the Holding Company for Water & Wastewater. The area features many carpentry workshops and garment shops and there is a large market in the area selling food, jewellery and ready-made clothes on a daily basis. There are also several factories in the area such as Berzi Food factory, Mostafa Ali Lighting factory, Al-Nasr Pipes factory, Al-Karnak Tiles factory, and Trix Paint factory. These factories employ some residents, but most of their skilled workers come from outside the area.

The main sources of income in El-Warraq include public employment, work in day labour, transport business or small shops or workshops. A family’s main expenditures are food, household expenses, education, health services, house rent, gas canisters, and electricity and water bills. Most of El-Warraq’s residents are unable to make savings due to the high cost of living, their low incomes and an average family size of 7.

Men are usually the main income earners and the unemployment rate is perceived to be high in the area, especially among youth. There are no vocational training centres for young people in the immediate vicinity and residents lack start-up capital to establish small businesses.

In the Participatory Needs Assessment, the inhabitants of El-Warraq identified the poor quality of education as their biggest concern. In a second place, they ranked unemployment a priority problem in their area. And finally, the absence of waste management and the accumulation of garbage in the streets were also identified as key problems by the neighbourhoods’ residents. Specifically male respondents also raised concerns about increasing insecurity and drug abuse in the area.