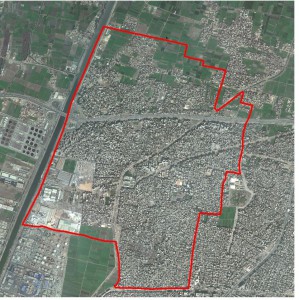 Khosoos City was formally established as a city in 2006. It is one of the cities that resulted from the extension and random growth of some villages of Markaz El Khosoos. The population is approximately 700,000 inhabitants occupying around 6 square kilometres. Khosoos is located in Qalyubeya Governorate and is bordered by the ring road and Ismaileyya canal from the East as well as the petrol company street in Mostorod in the North. It is bordered by El-Marg district from the South and the West. The main activities in the city are of industrial and commercial nature. It also has a vibrant informal sector working in waste collection and recycling.