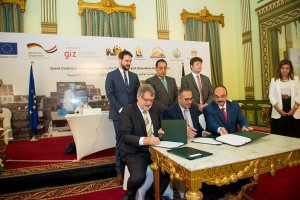 The Egyptian Minister of Housing, Utilities and Urban Communities, Dr. Mostafa Madbouly, hosted a meaningful signing ceremony on May 23, 2016. Under his auspices the Governors of Cairo, Giza and Qalyubeya exchanged signatures with the Participatory Development Programme in Urban Areas (PDP) and thereby sealed several grant agreements that will trigger infrastructural improvements in poor urban areas of Greater Cairo.  The total amount of the contracts is 6.65 Mio Euro. These funds from the European Union are supplemented by additional 740,000 Euro from the Governorates. This landmark event secured infrastructure upgrading measures in five target areas of PDP which are inhabited by a population of over a million. Apart from the Minister himself, the event was attended by Deputy Minister Dr. Ahmed Darwish, Mr. Sebastian Lesch from the German Embassy, Mr. Sébastian Trenner from the European Union Delegation to Egypt and the Programme Coordinator Dr. Guenther Wehenpohl, who co-signed the contracts on the German side.

“The beauty of the project stems from its proximity to residents of informal settlements”, Mr. Lesch explained during his speech that framed the importance of the measures. The selected projects will for example improve educational, health, waste management and sanitary facilities. The Governorates selected the projects in consideration of the needs of the inhabitants, which were previously determined by PDP in a Participatory Needs Assessment.

PDP is an Egyptian-German Development Programme implemented by the Deutsche Gesellschaft für Internationale Zusammenarbeit (GIZ) GmbH on behalf of the German Government and co-financed by the European Union.