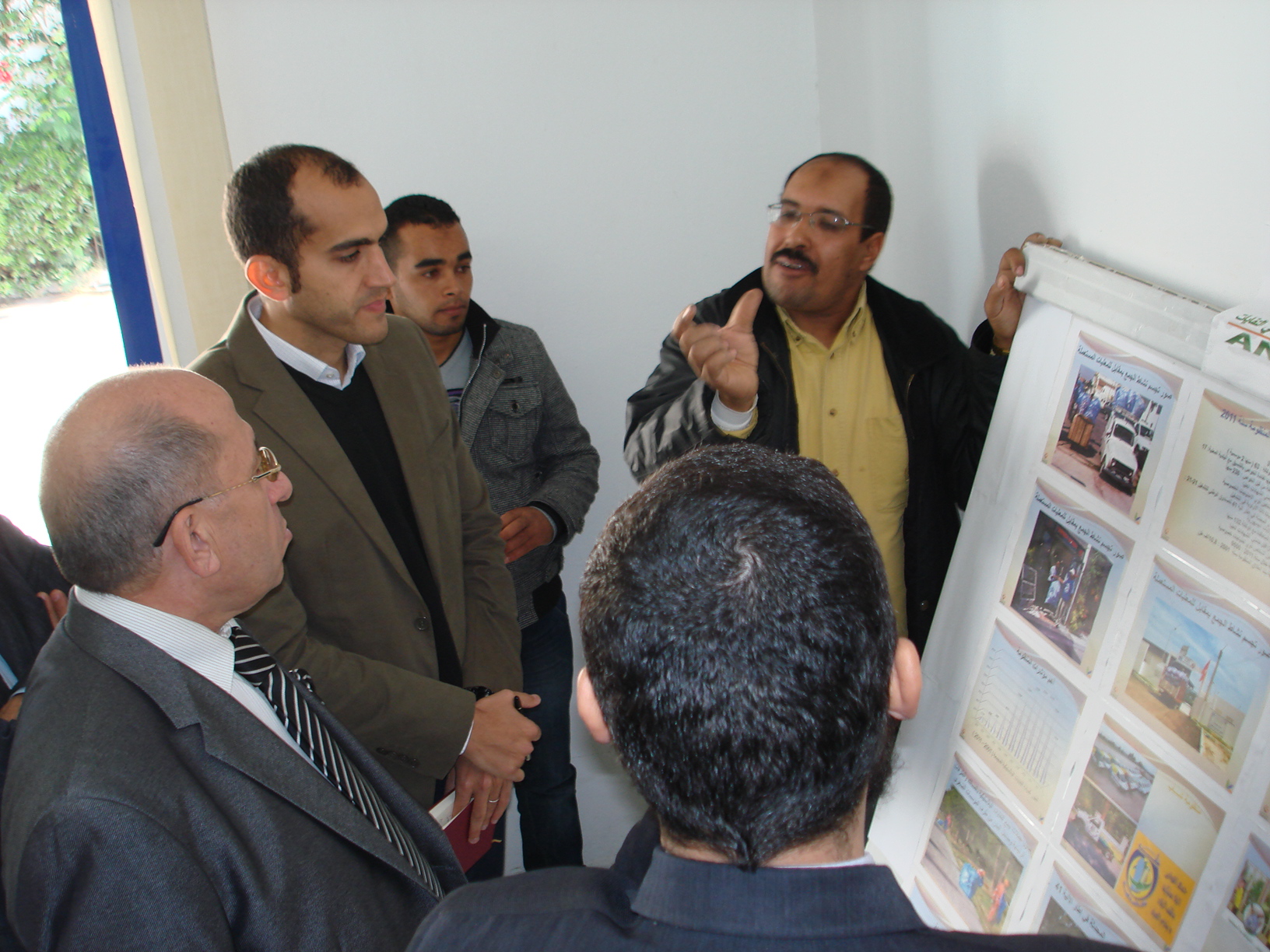 An Egyptian delegation comprised of representatives from Qalyubeya Governorate and the Participatory Development Programme (PDP) visited Tunisia and Morocco from 1 to 9 December 2012 as part of a study tour on solid waste management.

During the tour the Egyptian delegation got to meet with representatives of government on the central and local level as well as private sector companies in both countries. The delegation also visited recycling centers, landfills and treatment facilities.

The main topics covered were:

The most important lessons learnt on the study tour were the significance of strong institutional set up for waste management at the central and local level for effective waste management, the need for integration of the informal sector and the importance of innovative means for covering costs of services. The municipalities of Rabat and Tunis agreed to form ongoing partnerships with the governorate of Qalyubeya and to continue to exchange information and expertise after the tour.

The study tour was organised by the PDP together with SWEEP-Net, the regional solid waste exchange of information and expertise network in Mashreq and Maghreb countries.

100 students and 30 teachers from six schools in Khosoos took part in an environmental campaign at Khosoos Primary School on 23 and 24 November 2012. 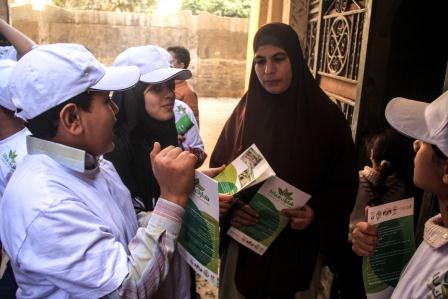 Students talk to residents about their campaign

As part of the campaign, students painted the walls with environmental messages, cleaned up the garbage in their school yard, planted trees, and presented their own plays and artistic performances around environmental topics. Students who were trained on paper recycling through the programme were also able to showcase products they produced from used school paper such as bookmarks, decorations, bags and folders.

The event came as part of the awareness raising and community mobilisation action plan – an integral part of the solid waste management component of the Participatory Development Programme in Urban Areas (PDP).

The school suffers from neighbours throwing garbage from their balconies into the school yard. In an effort to make them more aware of the problem, students went around local residents’ houses, informing them about the campaign and their vision for their school environment, and asking them to help them keep their schoolyard clean.

Zeinab Ibrahim, a social worker at the school, said: “The aim of this weekend’s camp is to clean up the garbage to make the school a nicer place and ask to neighbours to stop dumping their garbage inside the school.”

Different participants contributed to the success of the camp: The school bought the trees that were planted while Khosoos city council removed the piles of garbage from the school yard.

14-year-old student Ahmed from Khosoos said: “We should let our parents, neighbours and other students know about the importance of keeping our school and environment clean. People have responded very positively to our campaign. We are starting with this school and hopefully we can extend it to others, too.”

Khosoos generates around 400 tons of waste daily, half of which is piled in streets, vacant lands and inside schools, causing various environmental and health problems. The programme seeks integrated solutions to the problem – all of which are only sustainable with community participation. 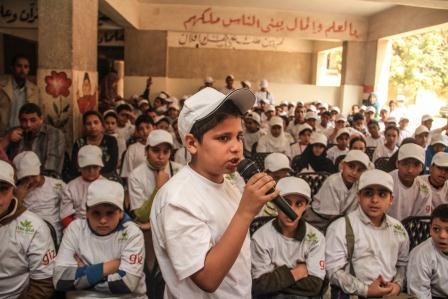 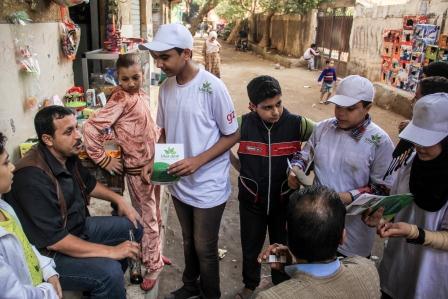 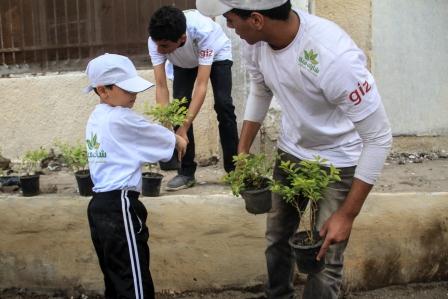 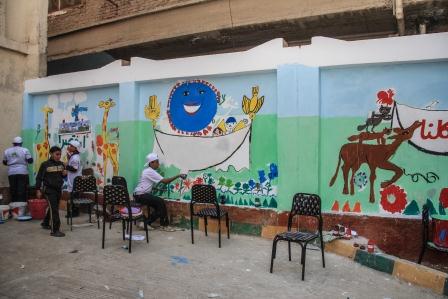 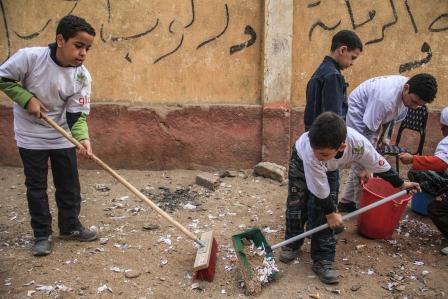 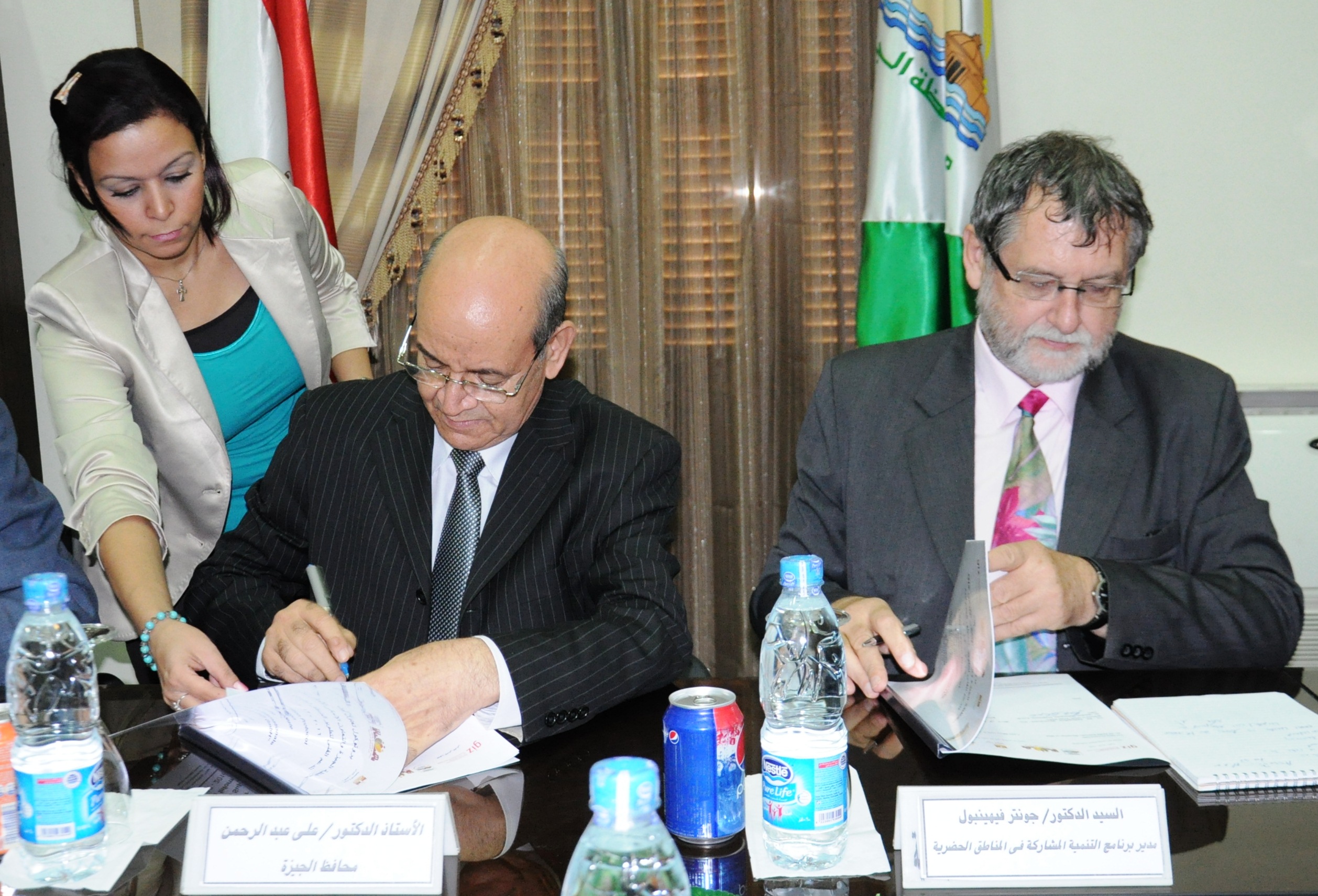 On 4 October 2012 James Moran, Ambassador of the European Union (EU) Delegation to Egypt, visited informal areas in Giza Governorate, marking the start of a new phase of upgrading measures carried out by the Participatory Development Programme in Urban Areas (PDP) to improve the living conditions of an estimated 1.9 million residents in informal areas in Cairo and Giza. 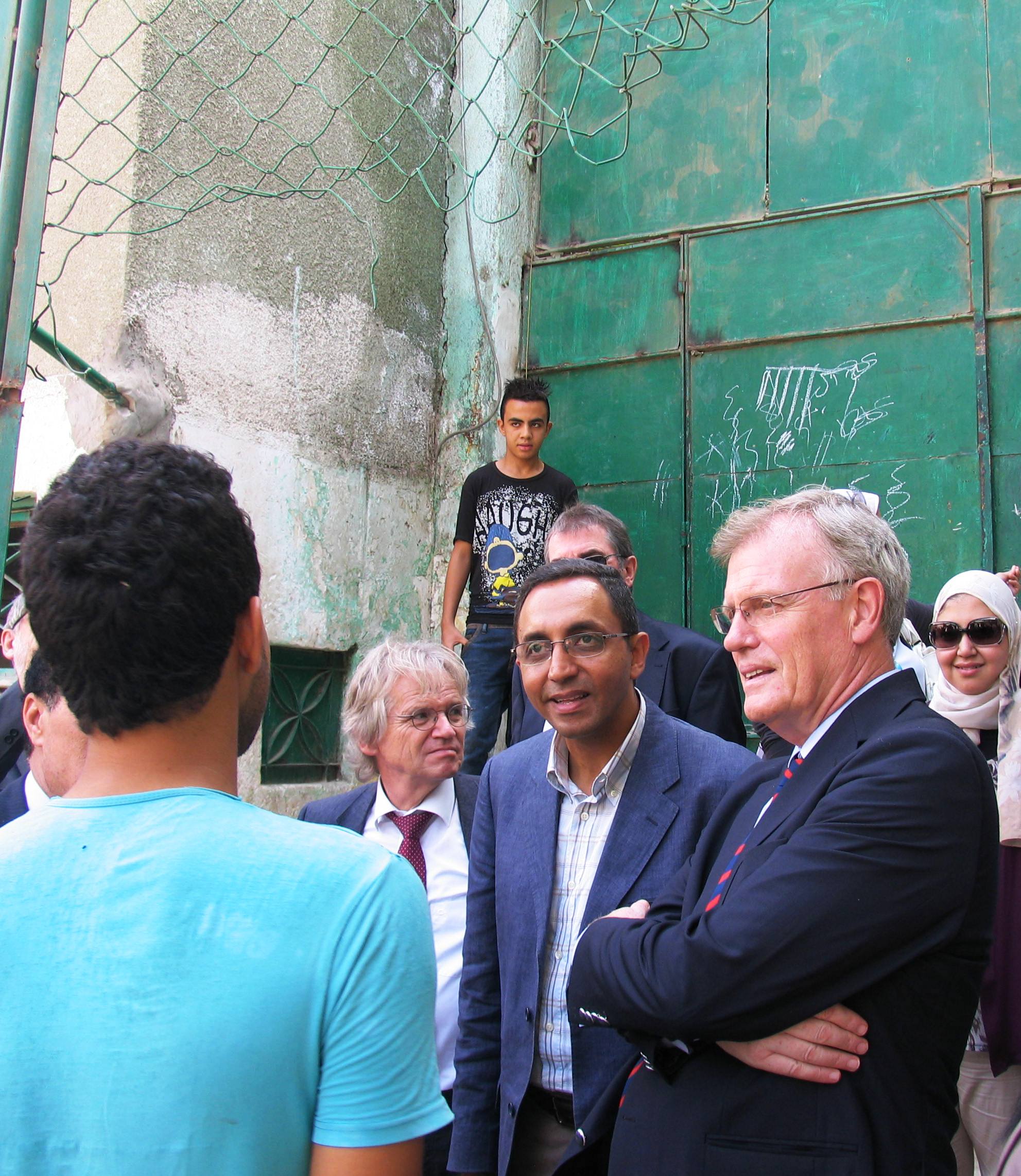 James Moran visited Local Initiative Projects implemented previously in Boulaq El-Dakrour. These include a health center for the area’s residents, a workshop where local women sew textiles and a new football pitch in a youth club. He also seized the chance to speak with fire fighters about the improved fire services in the area.

Afterwards the Ambassador visited Masaken Geziret El-Dahab in southern Giza – one of four new areas to be upgraded by the PDP with EU co-financing – to get to know the situation on the ground and talk to local residents about their ideas for improving living conditions in the area.

The high-profile visit came in the wake of a new agreement between the Egyptian Ministry of Planning and International Cooperation and the EU to carry out additional urban upgrading measures in Cairo and Giza over the coming 4 years. Based on the PDP’s successful track record and strong experience in the area of urban development it was agreed that the EU would co-finance the programme’s  work in four informal areas (Masaken Geziret El-Dahab and Hekr Ibli/Warraq in Giza, and Ain Shams and Ezbet El-Nasr in Cairo Governorate).

Joining Mr Moran on his visit were General Ahmed Hany, the Assistant Secretary General of Giza Governorate, and Dr Mohamed Fathy Sakr, Economical Advisor to the Minister of 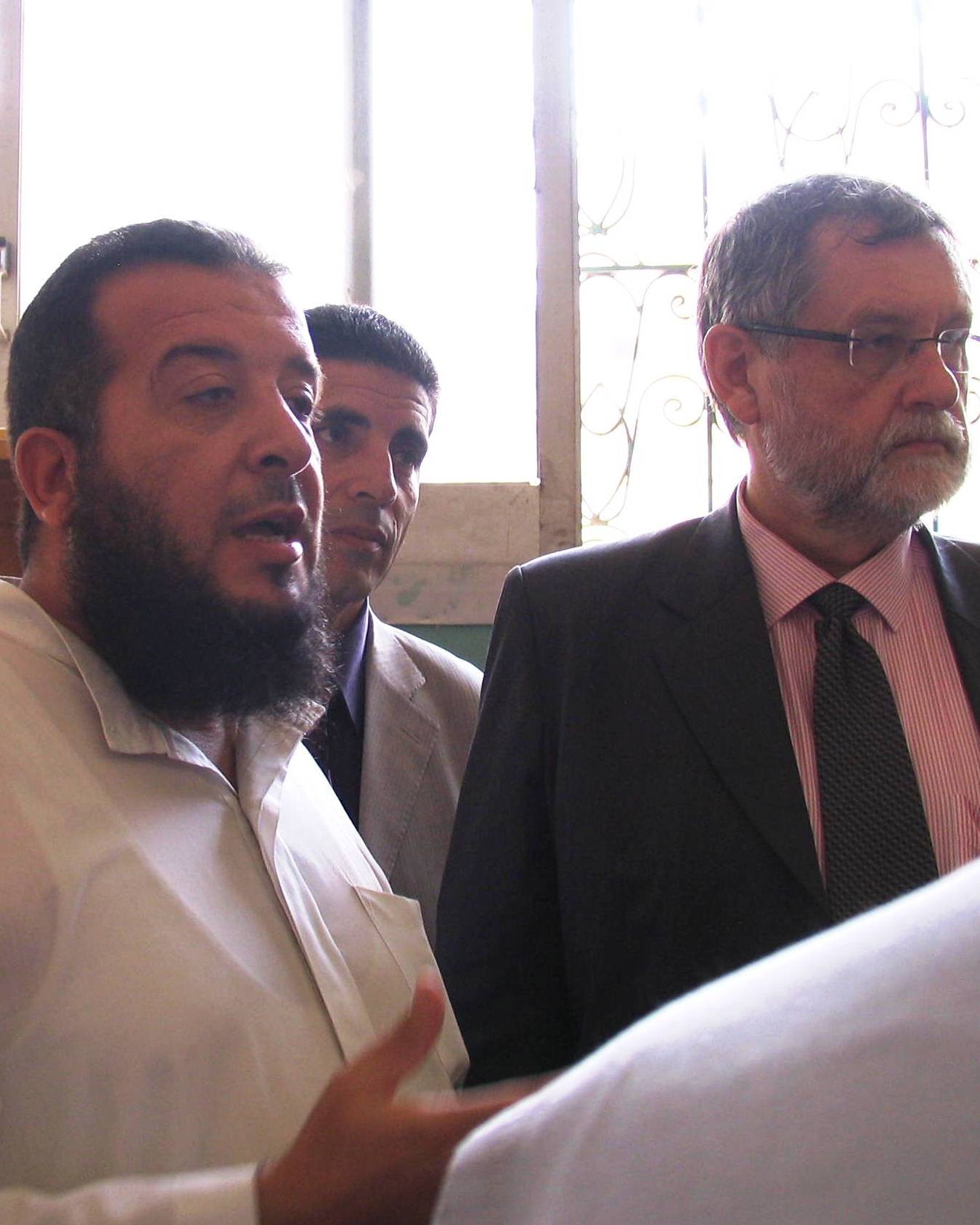 Planning and International Cooperation. The visit to the two areas was preceded by a short meeting between the EU Ambassador and Dr Ali Abdel-Rahman, the Governor of Giza to discuss the cooperation and the work ahead.

4 informal areas will be upgraded until 2016

partners – including public administration, civil society, and the private sector – to upgrade the selected four informal areas in Cairo and Giza until 2016.

Approximately 60% of people in Greater Cairo live in unplanned, densely populated areas that lack basic services and social infrastructure, and are suffering from environmental pollution. The PDP’s aim is to upgrade informal areas, in ways that involve local residents, and to enhance their living conditions and alleviate urban poverty through improving local services and environmental conditions. 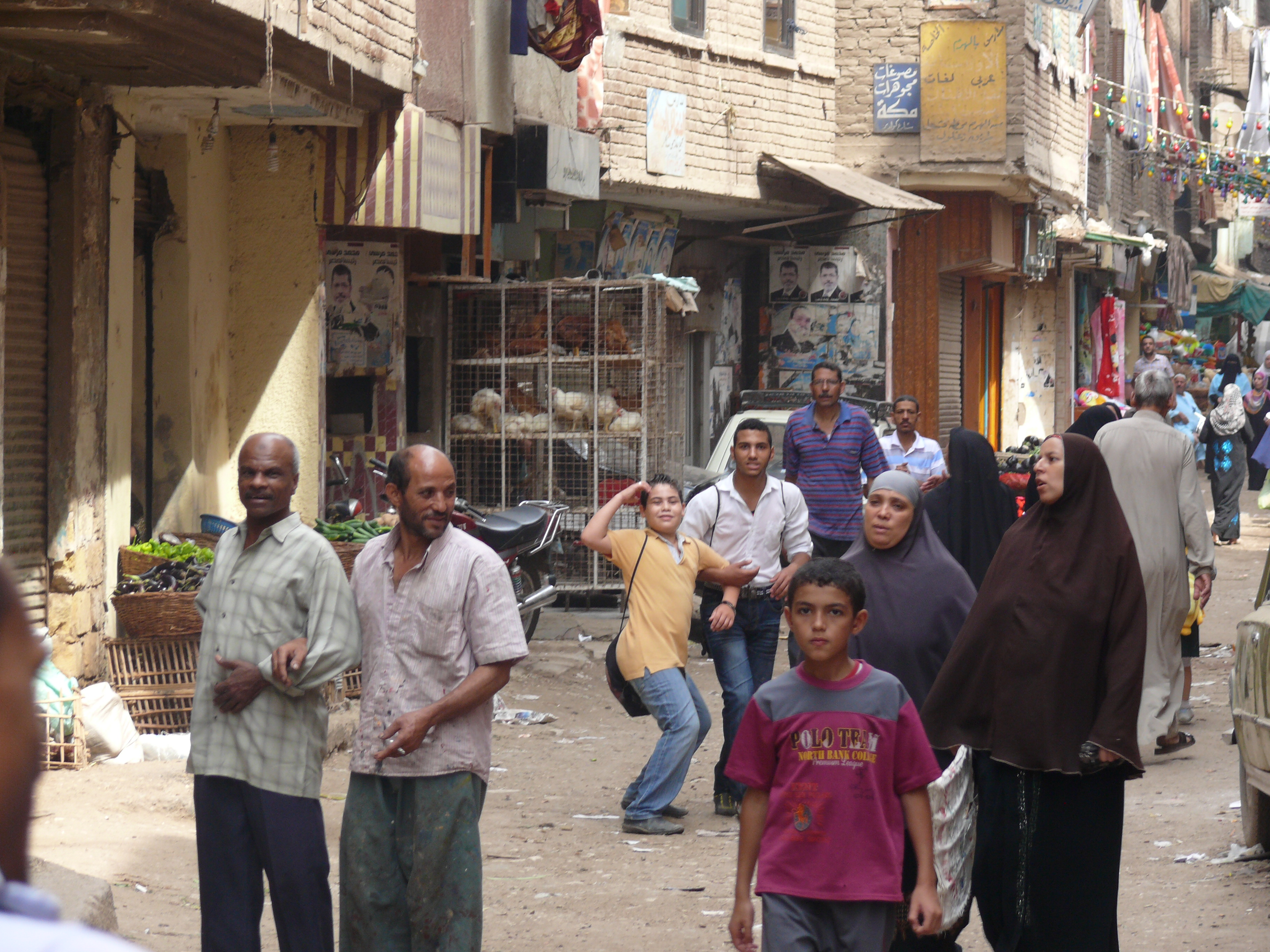 A delegated cooperation agreement between the EU and the Deutsche Gesellschaft für Internationale Zusammenarbeit (GIZ) GmbH (German Development Cooperation) for the upgrading of informal areas in Greater Cairo was signed on 28 August 2012.

With an EU contribution of € 20 mio the Participatory Development Programme in Urban Areas (PDP) will over the coming four years upgrade four informal areas in Cairo and Giza Governorates in partnership with their local administrations, improving the living conditions of an estimated 1.9 mio local residents.

As a result of the EU co-financing the PDP has become the biggest technical cooperation programme in the Middle East and North Africa (MENA) region implemented by the GIZ.

Kai Böckmann, the Deputy Head of Mission of the German Embassy Cairo said: “This financial contribution is a great opportunity for the programme to build on previous experiences and increase its common impacts.”

Prior to the Egyptian Revolution, residents of informal areas largely avoided contact with local government authorities. Now, in the wake of the political changes, many residents expect quick improvements to their living situation. This increases the pressure both on local administration and community-based organisations which for the most part lack the resources and capacities to respond to the needs of people.

“A window of opportunity”

Maria Schäfer, Director General of the Mediterranean Region, Europe, Central Asian Countries at GIZ said: “The change process in the Arab world opens a ‘window of opportunity’ for needed reform processes. GIZ considers urban development as the vital engine for development strategies and as one very important element to develop and support democratic progress. Thus, GIZ is very keen to support the governmental actors involved in urban development in becoming a strategic actor and key agent for development initiatives to ensure adequate service delivery and improved living conditions for their citizens.”

The key to the programme’s success is that not only local authorities, civil society organisations and the private sector are involved, but crucially also local residents themselves, who generally know best what their neighbourhoods’ development needs are. The PDP has over the years developed many participatory urban development tools that are applied in the upcoming phase.

The four areas specified in the cooperation agreement between the EU and GIZ are Ezbet El-Nasr and Ain Shams in Cairo Governorate and Masaken Geziret El-Dahab and Hekr Ibli/Warraq in Giza Governorate. The areas were selected by the Urban Upgrading Units of Cairo and Giza.