Participatory Development Programme in Urban Areas (PDP) successfully held a Signing Ceremony for contracting 17 Grant Beneficiaries in the Sofitel Cairo El Gezirah Hotel on 7th of July 2014. During the event, which was attended by His Excellency Dr. Ashraf El-Araby, Minister of Planning, His Excellency James Moran, Ambassador of the European Union Delegation to Egypt (EUD) and by almost 200 invited guests, the selected projects to be awarded grants were presented and contracts officially signed for upgrading informal areas in Cairo (Ain Shams, Ezbet El Nasr) and Giza (El Warraq, Masaken Geziret Al Dahab) Governorates. As part of the agreement between the European Union Delegation to Egypt and the Deutsche Gesellschaft für Internationale Zusammenarbeit (GIZ) GmbH, who is the contracting authority, these projects are funded by the EU with almost EUR 1.5 million (EGP 14.6 million). Their focus lies on improving services in informal areas, enhancing employability and promoting income generation in the respective areas.

“The Grant Beneficiaries Signing Ceremony presents the results of the First Call for Proposals which we organized in early November last year,” said Dr. Günther Wehenpohl, Programme Coordinator PDP. “It asked for proposals for projects which should improve the livelihoods of the residents of the four selected areas. More than 90 applicants followed the Call and we are happy to support 17 of them which have scored highly and which meet the necessary criteria according to EU specific rules and regulations.” The selected organisations will work on issues such as improving employability and vocational skills of the unemployed within the four areas, fostering income generating activities and enhancing the standards and range of services available to the community. The 17 Grant Beneficiaries are now contracted by the PDP which has the Ministry of Planning as its main partner and which is actually the only international development cooperation programme working on improving and developing informal areas in Egypt. The PDP is financed by the European Union (EU), the German Government, the Bill and Melinda Gates Foundation and the Egyptian Government. The current phase of the development measure (2012-2018) under which the 17 Grants will carry out their tasks within the upcoming year is funded primarily by the EU contribution. “The development of civil society is an essential part of the EU’s partnership with Egypt and I am confident that these projects will contribute significantly to improving the lives of the residents,” said James Moran, EU Ambassador to Egypt. “We are proud to support programmes like the PDP, which has had proven success in fighting poverty and delivering benefits to the needy over the last decade,” Moran added. To help facilitate the successful implementation of these projects PDP staff together with the respective partners in the two Governorates will be providing technical support. Furthermore, the development measure is part of the Egyptian Government’s policy for improving informal areas. “It is based on the needs of the respective communities in our selected areas. Its participatory approach is unique and includes civil society, local authorities and the private sector who are jointly working together in a spirit of cooperation to develop these areas,” said Dr. Ashraf El-Araby, Minister of Planning.

The Participatory Development Programme in Urban Areas (PDP) is an Egyptian-German development programme implemented by the Ministry of Planning (MoP) and the Deutsche Gesellschaft für Internationale Zusammenarbeit (GIZ) GmbH, on behalf of the German Federal Ministry for Economic Cooperation and Development (BMZ). Itfocuses on the improvement of the living conditions for the poor urban population in the Greater Cairo Region. Funded by the EU with EUR 40 million and by the BMZ with EUR 6 million, the PDP cooperates with representatives of the civil society and operates on different administrative levels through cooperation with decision makers at national, regional, and local levels on upgrading informal areasin the Governorates of Cairo, Giza and Qalyubeya until 2018. 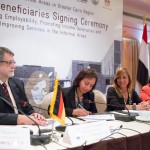 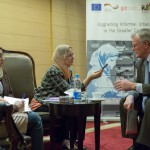 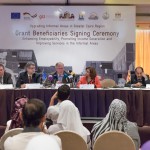 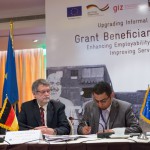 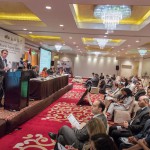