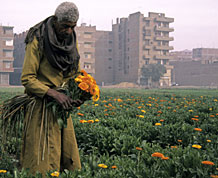 Egypt’s cities are growing fast and will continue to grow. With an annual national population growth rate of 2.2â3% over the past decades, Egypt has approximately 1 million new citizens to house every 8 months. Population growth combined with rural to urban migration cause staggering rates of population increase of almost 4% annually in Egyptâs urban centres.

In 2008, Cairo, Egyptâs capital, has a population of an estimated 18 million people. The city has been deeply transformed by global dynamics of urbanisation which have increased its population by more than six times in the last 60 years. While the in-migration of rural population has represented one of the major fueling factors for this urban expansion, recent studies have shown that this is no more the case. While in 1960 35% of Cairo’s inhabitants were born outside the city, by 1996 this number had reduced to 12%.1 The capital’s growth is now due mainly to natural population increase and to the incorporation of surrounding villages and rural populations .2