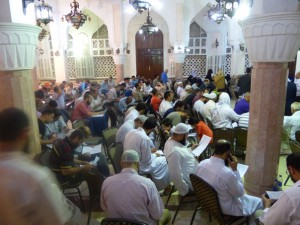 Ain Shams is located in the North-East of Cairo Governorate and covers an area of 8.33 square kilometres with a population size of 1.582.000 inhabitants. The area’s name means “Eye of the Sun” in Arabic and is an allusion to the fact that the neighbourhood was built on the site of the ancient city of Heliopolis. Ain Shams encompasses various social and economic strata of Egyptian society and community cohesion is relatively low due to the discrepancy in living standards in the area. There is more of a sense of community in the target area of Kafr Farouk, a small part of Ain Shams with a lower than average living standard.

There are no big private sector companies active in Ain Shams, except for the confectionery factory Covertina which mainly hires employees from outside the area. Besides, there are scattered garment sweat shops that tend to hire unskilled female labour. Most men in Ain Shams look for job opportunities outside the area or work in small craft workshops within the neighbourhood. 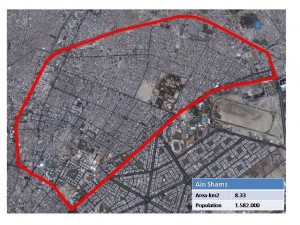 The lack of decent job opportunities in Ain Shams is due to the absence of hiring companies in the area and the weak structure of SMEs. Youth often lack sufficient qualifications to meet labour market demands and training opportunities for young people are largely unavailable in Ain Shams. Most girls fail to complete their schooling and begin to work in sweat shops at a young age. The high unemployment rate prompts youth to spend a lot of time in the streets using drugs, harassing women and sometimes getting engaged in violence.

In the Participatory Needs Assessment, residents of Ain Shams identified new security issues in their area, which include sexual harassment, theft, drug abuse and arm handling. But the biggest priority of the local population is the absence of garbage collection and the resulting pollution of their neighbourhood. Secondly, the low level of education is of major concern to inhabitants and is directly related to the third identified priority, namely unemployment.