On Saturday, March 14, together with 7 Grant Beneficiaries and 1 Local Initiative Fund Beneficiary, the Participatory Development Programme in Urban Areas (PDP), organized a Gender Fair to celebrate International Women’s Day (March 8) and Egyptian Women’s Day (March 16). It was a full day of activities for all ages organized in Al-Azhar Park.

Over 200 participants, children, youth, women and men, from three different informal areas of Greater Cairo (Ain Shams, Ezbet el Nasr and El Warraq) joined us and participated in lively discussions and activities exploring gender and women in the Egyptian context.

The different activities explored the relationship between men and women in Egypt and triggered a discussion about male and female employment and respective gender stereotypes. Women who are engaged in entrepreneurship shared their experiences and responded to questions and comments from the audience. Children drew posters and performed a puppet show depicting the struggles of girls to access education. A documentary about women in Upper Egypt explored the challenges women face and the Initiative Ana Hunna “أنا هنا, I am here, Je suis là“ which is part of a regional GIZ programme on women’s empowerment, Economic Integration of Women in the MENA Region (ECONOWIN), showed the short movie “Om Amira”. The movie sheds light on the daily life of Halima Mohamed Ahmed or “Om Amira” (Arabic for “Amira’s Mother”) and explores how she bares the responsibility for her ill and unemployed husband and her paralyzed daughter. It depicts the real struggles and sacrifices of a mother in an impoverished family in Egypt to secure food, shelter and income. 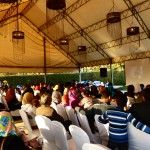 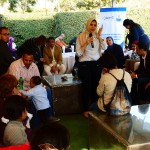 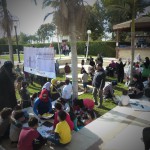 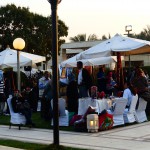 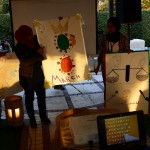 On March 11, 2015, the Participatory Development Programme in Urban Areas (PDP) met with the new Giza Governor, Dr. Khaled Zakariya. The PDP was represented by Dr. Guenther Wehenpohl, Programme Coordinator, Michael Heathcote, Head of Fund Management, Sundus Balata, Deputy Programme Coordinator and Senior Advisor for Youth and Gender, and Heba Behairy, Head of Institutionalisation and Capacity Building. It was a pleasant meeting with fruitful exchange and together, the PDP and the Giza Governor, outlined clear steps for cooperation moving forward. The PDP is keen to cooperate with the Governorates on the activities and measures of the programme and to align its approach closely with that of its key partners to foster participation, ensure ownership and sustainability.